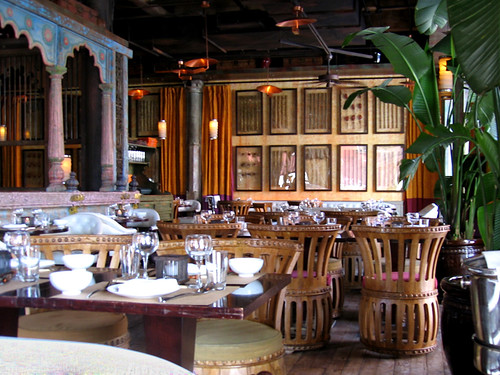 The over-the-top Southeast Asian decor of Spice Market would not be out of place on an Indiana Jones movie set. The attention to detail follows through from the pajama-like outfits of the waiters to the wooden “grand staircase,” a phrase that the waiters emphasize. The spare modern touches in the light fixtures and stainless steel utensils remind the eater that we are still in New York City. But of course you won’t be eating on the floor out of banana leaves using your hands in lieu of utensils. Get ready to lounge on upholstered white leather sofas or unique Asian chairs.

We entered the restaurant on a lovely early afternoon and were seated right by the open floor-to-ceiling doors. The restaurant is elevated from the street and offers a good view of the street below. Right outside some of the restaurant staff were setting up bistro tables and chairs, unloading them rather noisily from a truck for the rest of our time there. A long while later, we were finally given what in other restaurants would have been the bread and butter, but are here the pappadam, a fried paper-thin bread made from lentil flour, and kasundi, a tomato and chili condiment or jam—it was very spicy. We are also handed hot towels—I wish they would do that in other places too. Soon after, one of our many waiters tried too hard to get us to order cocktails and iced tea, but I ordered myself a glass of Gewurztraminer, which was a good choice considering that a few of the dishes to follow needed a sweet drink to combat the super spiciness.

The menu features a good variety of choices family style, dividing its main courses into seafood and meats. The meat dishes do have more noticeable Southeast Asian influences than the seafood with such items as pork vindaloo, red curried duck, and Vietnamese chicken curry. Also offered are many appetizers, soups, and salads. For an appetizer I ordered the shrimp tod mon pla, which turned out to be little shrimp and scallion pancakes served with a cucumber peanut relish. They were crunchy and tasted simple and cleansing. For our entrees we ordered two seafood dishes, the striped bass with wok-fried napa cabbage and water chestnuts and the steamed red snapper with sauteed wild mushrooms and an herb and ginger gremolata. The waiter also recommended a vegetable side dish of snap peas and shitake mushrooms. On second thought we realized we shouldn’t have ordered two fish entrees, since it was family style.

The striped bass was the first dish brought out, followed about ten to fifteen minutes later by the two remaining entrees. It was batter-fried and lost under a heap of napa cabbage and a sour and spicy red sauce, which was absorbed into the water chestnuts. The waiter did forewarn me that the bass dish was very spicy, which was fine, but at least we would have had the opportunity to eat everything in order of spiciness, because we had finished the bass by the time the two additional dishes arrived. By now our palates were inundated with the heat of the bass dish, making it difficult to discern the subtle yet antiseptic flavors of the snapper, which was what I would consider an unmemorable middle-ground dish. We had imagined that the snapper would be the whole fish or at least the filet, but instead it was a center cut and it was not plated family style, for example the striped bass filet was cut up in pieces, but here the snapper was just the center cut placed on top of a bed of mushrooms. Also the menu called for an accompaniment of sauteed corn, but there was no corn to be found. The small plate of snap peas and mushrooms was sauteed in a sweet sauce, very similar in flavor to most Chinese food take-out. It’s price at $8 would be the price of a main course elsewhere. I liked the striped bass the best out of the three entrees because I think it was unique, but it could have been less spicy and presented differently. Each fish entree was served with a small bowl of dryish Jasmine rice.

Up to this point I would describe the service as medium-slow but steady. We were served by three different waiters and it seemed that one was finishing his shift before he gave his tables to the waiter who took over by dessert time. Once we had ordered the dessert to split between the two of us, it came in record speed. The Ovaltine kulfi was basically a frozen stick of Ovaltine sprinkled with seeds and spices, plopped onto the plate with four warm banana slices, and dressed with whipped cream and Cracker Jack-like caramelized popcorn. The waiter assured us that this was the restaurant’s signature dish. I had read that the restaurant also specialized in durian ice cream, but unfortunately that is no longer on the dessert menu—I would have tried it. I had originally thought to order the coconut creme brulee, but since the waiter said the kulfi was the signature dish I decided that I should try the dessert most representative of the pastry chef’s vision. My assessment: the kulfi was an O.K. dish. After a few bites or spoonfuls it got boring a little too quickly. What I have since heard is that Ovaltine is very popular in India, so I guess this dessert was a unique way of representing that fact. But without this knowledge in hand, it’s easy to think that the dessert is just out of place.

We left the restaurant even before a crowd would have gathered. On arrival we only saw four people, and by the time we left there were ten people. It would be nice to see the place busy in the evening, just to see how different the decor looks in evening light and how the service adapts to the busyness. The quality of the service was good, with many attentive people, but I thought it was confusing to have three different waiters. I wasn’t sure at first if one was the beverage waiter while the other was the regular waiter, but in the end it did not make sense. In the near future I would like to go back and try the meat dishes to see how they fare against the seafood dishes. I think the restaurant comes close to creating that sense of Southeast Asia, but in the end it’s really the influence that comes through, which I guess is the goal. If you bear that in mind you will find not much at fault. Just make sure you insist that all entrees come out at the same time, and ask to know the spiciness of each dish.