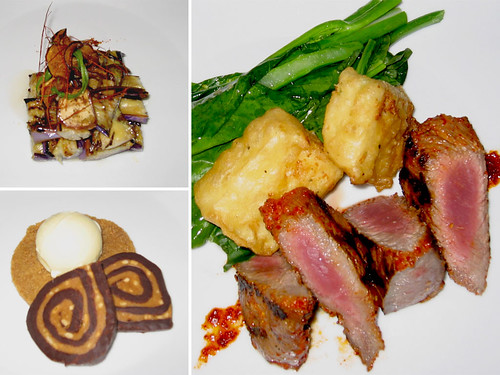 Bar Q is definitely not your Dallas BBQ. It is a hyper-stylized white space that seems more of a boutique than an Asian-fusion barbecue house as it's billed. Further underlining the boutique look, the restaurant is made up of two combined premium West Village store front spaces, which splits the restaurant into two sections. One side has the bar nook along with an oyster bar. The other section has small square tables with white-leather high-backed booth seating along the main wall, horseshoe shaped booths in the front window nook, and light maple wood finishes all around. There is also an exterior space covered in glass panels resembling a greenhouse.

The cocktail menu, ranging in price from $11 to $13, is filled with fun Asian-inspired drinks: pickletini, bubble tea on the rocks, lychee cocktail, Filipino spritz, etc. A yuzu cosmo, which tasted pretty much like any other cosmo, was easily downed as no more than a spiked sweet fruit juice. A shiso julep was basically a mint julep made with the Japanese mint, but was good nonetheless.

For appetizers, the menu features many unique items; of particular interest were the lobster spring rolls, eel and scallion fritters, baby back ribs, grilled squid salad, and spit-roasted pork belly, which was my immediate favorite. I’ll take pork belly any time. The pork was roasted to the point where the skin was ultra crackly, but the meat was a bit dry and under seasoned. But it was redeemed and nicely complemented by kimchee, takuan (daikon radish pickle), and a silken tofu dipping sauce. You assemble all the components by stuffing them into a steamed bun wrapper and then stuff them into your mouth like a taco.

I generally do not care for miso at all. The smell of miso soup brings about dry heaves, but to put caution to the wind I tried my friend’s miso-glazed eggplant dish, a soft and succulent grilled eggplant. In my opinion, it made use of an undesirable ingredient in a good way. And there’s really no wrong way to prepare eggplant.

My dish of the Australian lamb, the most expensive item on the menu, was a grilled loan served with the specialty of the house, battered and fried garlic infused milk alongside a heap of bok choy sautéed in garlic. The waitress said that no one can resist ordering the fried milk. The loin was marinated in chili, which made it sour and tart, disguising the natural taste of lamb in a good way. This dish would be great for those who are touch-and-go with the taste of lamb, which can sometimes be gamey. The lamb was cooked medium—the waitress did not ask how I wanted the meat prepared—and I thus found it a bit dry for my taste.

The side of the fried milk was truly unusual. An Asian street-food specialty, the outside of the fried milk is a crunchy tempura-battered crust while the inside is custardy like silken tofu. But the texture can be off putting for some—I wasn't too sure about it at first. For a Westerner, I think the dish is the kind that needs to grow on you. It is offered as a side dish too. I recommend eating it on its own, because too me it seems like a dish that shouldn’t compete with the flavors of other bites taken.

Other quite sensationally sounding dishes on the main menu include tea-smoked chicken, tea-smoked duck, and stuffed spare ribs. I think they all sound incredible.

For dessert, there are many unusual items including a cold coconut soup and a warm walnut one, but the desert that immediately caught my attention was the chocolate peanut butter tartelette with pandanus ice cream. The dessert is rather small and simple. It is one layer of chocolate wrapped with another layer of peanut and rolled up like a Ho Ho and sliced. The ice cream, made from pandanus (a prickly globe-shaped, pineapple-like fruit), was a clean tasting refresher, like pickled ginger is to sushi. It made a good counterpoint to the chocolate-peanut combination. It was served on a bed of ground graham crackers, taken altogether with the chocolate and peanut butter swirls, the dessert reminded me of Reese’s peanut butter cups on an elite scale.