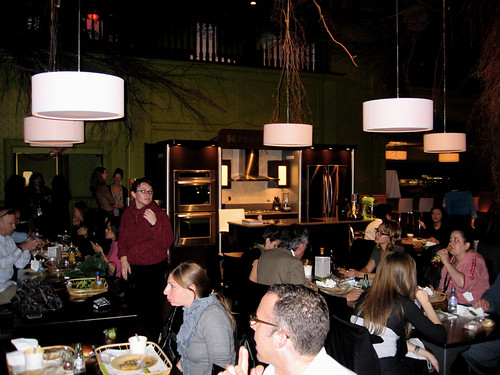 The Bon Appétit Supper Club and Café, the temporary pop-up lunch joint and chef hangout, is back again for its second year. All this week until Friday stop by for lunch between 11 a.m. and 3 p.m. for a quick gourmet bite and a cooking demo or book signing. The former Hard Rock Café space had been transformed into a green and brown autumnal space with modern cafeteria-style tables, lounges, and mini fireplaces. The chef-designed food is rather good even if the prices are a bit high. You have to consider that these are Midtwon prices and that the food is far less expensive than if you ate at the restaurants of these chefs. 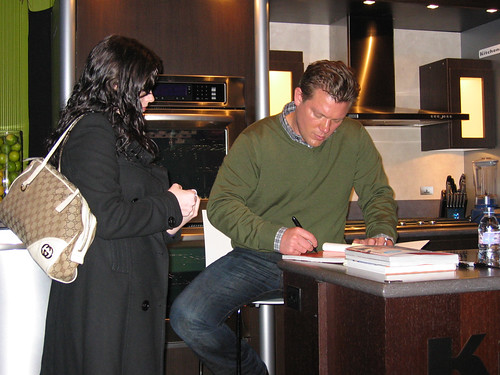 Today Tyler Florence was there for a book signing. Tomorrow both Claudia Fleming and Cat Cora will be there for cooking demos and book signings. And later this week: Jonathan Lindenauer, Ben Ford, Johnny Iuzzini, Pichet Ong, Charlie Trotter, and Stephan Pyles. 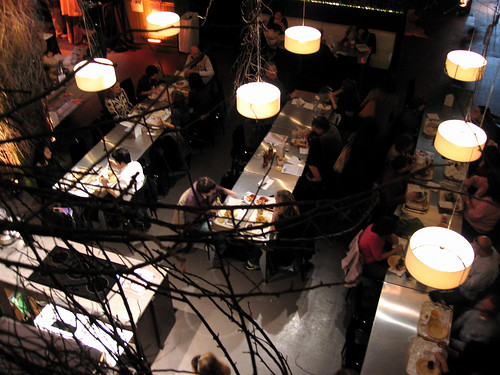 While you are there, make sure to grab a free copy of Bon Appétit magazine, and go on upstairs for a couple of shots of Robert Mondavi’s Woodbridge wine, Kerrygold cheddar, Ghirardelli chocolate, Gold Peak tea, and even a Maybelline makeover. Also there is a raffle for a KitcehnAid mixer, books for sale, and don’t forget the great cooking demos, which sometimes include free samples too. When I was there on Friday the Dessert Truck people handed out chocolate bread pudding samples. Also a portion of the proceeds go to charity. If your worried about your carbon footprint, notice that the food is served on bamboo plates, and the cutlery is made from corn starch. The supper club is also open for dinner but by invitation only.