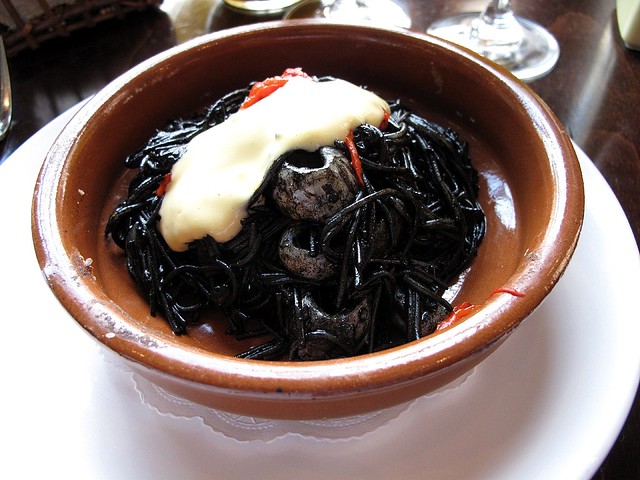 It’s that time of year again when you can enjoy a great three-course restaurant dinner for a fraction of what you might pay otherwise. It’s summer restaurant week. This is the last week, but I wouldn’t be surprised if it was extended as it has been in the past few years. For some restaurants it’s almost impossible to get a reservation at this time of year. I tried and tried but could not get a reservation to Alain Ducasse’s Adour. But actually I was very excited to try Bar Artisanal instead, which was opened a little more than a year ago by Terrance Brennan, the chef who also runs the very popular uptown French restaurant, Picholine.

What Bar Artisanal offers is a little taste of Spain in Tribeca and a venue for showing off the country's cuisine in new and different ways. And plain and simply, it's a great tapas bar too. The food reinterprets the cuisine of Spain for an American market that craves reinvention. Some of the tapas that are offered are pretty much classic, but others are a bit more modern. Main course dishes are also modernized, for example what in Spain is a traditional soup might be made into a sauce as an accompaniment to fish or a traditional beverage may be turned into a dessert topping. Many of these dishes can be hits or misses, but I’m foremost excited to see that this interest has been turned toward Spanish cuisine here in New York.

My fellow blogger, the Undomestic Amanda, who I’ve just promised to teach to cook, was once again my dining companion for the evening. I trust her palate and judgment since she has a keen interest in food and an understanding of flavor. On arriving at the restaurant I noticed immediately that there were already a smattering of people—mostly at the bar, and by the time we left the venue was almost entirely filled with diners who seemed to be all businesspeople enjoying a Friday night out after work. When making reservations—and later modifying them through OpenTable—I noticed that the restaurant had plenty of openings for the next few weeks unlike so many of the restaurant week participating restaurants. I was surprised that it wasn’t booked solid, but I can presume that it gets enough clientele from downtown that it never has to worry about its business being slow.

To start off the very hot evening, Amanda and I both agreed on ordering sangria, an idea to which I had long ago warmed up to, literally and figuratively. The restaurant offers five different sangrias, the traditional red wine with apple, orange, and lime; a white wine with peach, orange, and mint; a white wine with pisco, mango, and pineapple; and a white wine with jalapeno and lime. We ordered the tropical-sounding sangria with mango and pineapple, which the restaurant has coined the Latino. The little jug was a bit overpriced and unfortunately it soon became watered down from the ice. Despite that it was a very refreshing and strong drink. The pisco liquor added a kick that we could feel by dinner’s end. But here I must tell you not to make the same assumption I did: The same small jug costs $10 at the bar yet $20 at our table. Later I learned that only at the bar is happy hour pricing available, so no half-off drinks for diners!

In my usual preparation for dining out at a new venue, I always check for menus online and in the case of Bar Artisanal, I was very intrigued by the many unique offerings, beginning with the squid pasta. The fideos negros is a very popular dish in Spain and a specialty of the restaurant. Fideos is the name for the thin vermicelli-like pasta, which is here tossed with squid ink and dressed with slivers of pickled piquillo pepper and a dollop of traditional garlic aioli. It was a complete first time for me trying squid ink. At first the color of the dish does not make it seem appetizing, but there is something most interesting about the glistening onyx color. I was prepared to try it and I went for it wholeheartedly. It was salty, briny, and very creamy. It was very unique and tasty—to say the least. But you must realize that there are a few side effects, first black mouth, and a warning: don’t be surprised the next day when you find that something else is black too.

Amanda avoided my dish but enjoyed hers immensely. The white gazpacho reminded me of the one from 10 Downing a summer earlier. It was just as good, frothy, and refreshing. It is made with cucumbers, grapes, and almonds, among other ingredients, which are all blended together. There really isn’t anything better than a classic Spanish gazpacho on a hot summer day. I’m vowing to re-create this dish at home very soon.

For our main courses, the waiter had highly recommended the skate and chicken. So I went with the skate and Amanda, the chicken. If I haven't said it before than I am saying it now: I truly believe that ordering chicken is a good way to gauge the quality of a restaurant. If they can’t mess up simple chicken then you know they’re pretty good at what they do. The skate comes with samfaina and salmorejo sauce. The samfaina was a vegetable sauté of mostly diced zucchini and eggplant. In Spain it is a vegetable dish much like ratatouille from the south of France. But in this dish it was just a simple sautéed side. The salmorejo, which is a traditional cold gazpacho-like tomato soup in Spain, was here used as the sauce. The skate was nice and crispy, but somewhat fibery. The sauce was silky but not as flavorful as I would have imagined it to be. The sautéed vegetables were good but I think they were lost on the dish.

What I enjoyed even more than my own meal was my Amanda’s dish: a roast chicken with lemon, olives, and a pimentón picante—a smoked paprika sauce. The meat was juicy and citrusy and the sauce was smoky and much more flavorful than mine. I continuously stole olives from Amanda’s dish to make up for the lack of salt in mine. In the battle of main course dishes, the chicken won hands down. A side dish was provided with the chicken, a skin-on boiled potato dish with mojo verde, a chimichurri-like sauce of cilantro and garlic. It was a very nice foil to the chicken. The potatoes are also on the tapas menu. I can see it making a nice complement to chorizo.

Sadly for us dessert lovers only two options were offered for dessert, a cake called Santiago, which was an almond cake accompanied by a scoop of ice cream drizzled with a caramel-like reduction sauce made from Pedro Ximénez wine. The cake had a texture of pound cake and was tender and moist. The other dessert was coffee granité with horchata cream, or as the menu called it, a “cloud.” Horchata is a Spanish beverage made of ground uncooked rice and almonds. It tastes sort of like a sweet and frothy version of almond milk. In this dessert it functioned as the sweetened whipped cream for an unsweetened coffee ice. I was very pleased with both desserts, but wish that more options were offered for restaurant week, like classic churros.

At Bar Artisanal I was very much interested in seeing and understanding the chef’s unique way with dishes. Unfortunately I think that without explanation, the uniqueness of each dish pretty much goes unnoticed for diners. You won’t learn much about your food without asking questions from your server. But than again the business crowd that dines here might not even care. The restaurant's name does say a lot about what it stands for, and that is artisanal products, like cheeses, charcuterie, and French-style pizzas, which are baked right in a wood-fired oven. Beyond that there are wonderful tapas and main courses that give due attention to old and new Spanish cuisine.

With just a few misses, but more hits, I can recommend the restaurant as a great place to enjoy a meal with friends, colleagues, or family. It's the type of venue where you want to go in a large crowd and try a bunch of tapas and get buzzed on overflowing pitchers of sangria. I know that if I'm afforded another opportunity to dine at Bar Artisanal, next time I will try countless tapas, cheeses, pizzas, and most definitely I will not leave without ordering churros. That will be my only regret this first time. If you are still interested in restaurant week, make your reservations now for the most popular restaurants. But at Bar Artisanal you can have an enjoyable meal any time so don't worry if you miss out on restaurant week this summer, because there will always be time to try the many tapas.