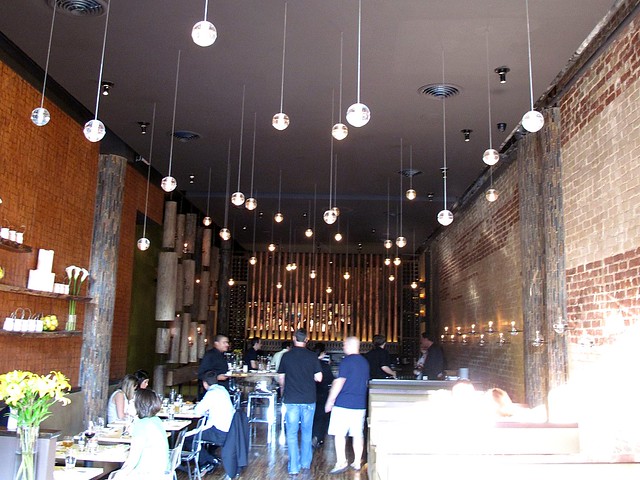 From just opening last fall, Birch & Barley in Washington, D.C. has received some very noteworthy praise and an award for best new restaurant. I can clearly see why. With its garage door front, the restaurant reminded me of many eateries in New York that are purposely built with garage doors for hip effect, whereas Birch & Barley was converted from working garage to restaurant, making it infinitely more genuine and hip. With a modern interior with rustic touches, tall ceilings, an open kitchen, and a beer-centric bar, the restaurant has a lot going for it. The husband and wife team, chef Kyle Bailey and pastry chef Tiffany MacIsaac, are both New York restaurant transplants. Having both met and worked at Shea Gallante’s Cru, Bailey later worked for Dan Barber at Blue Hill at Stone Barns before meeting up with MacIsaac again at Allen and Delancey. Both left Allen and Delancey in the summer of 2009 to open the restaurant Birch & Barley and the bar ChurchKey with the Neighborhood Restaurant Group. Since then the restaurant's popularity has literally taken off.

With a very unique and creative menu featuring farm fresh products, 555 artisanal beers served on tap in ChurchKey, and a dessert menu that makes the last course anything but an afterthought, the restaurant is worthy of its early acclaim. Greg Engert, the restaurant’s resident beer director is an expert in his field who first began his career in the restaurant business waiting tables while earning a graduate degree in English from Georgetown University. You will never meet anyone with more expert knowledge and passion for beer. Engert simply exudes beer through his excitable personality, flowing directly from his hands as he explains the history behind any of the 555 beers on tap. If I were asked to offer only one reason to visit the restaurant and bar, it would be to see Engert in action.

I was lucky to be invited to Birch & Barley among a group of food and travel bloggers and writers on tour of Washington’s culinary hotspots with Destination DC. Our group was treated to a full tasting menu with each course paired with an exceptional artisanal beer. Even those among the group who came ambivalent about beer were left with a deeper appreciation and fondness for beer. Many of our beverages, so unlike the beers we’ve ever tasted before, had us realizing the vastness of artisanal beers available. I met a few new favorite beers that I soon will be looking forward to pairing with my own culinary creations.

With hardly a moment of waiting, Engert welcomed us to the restaurant and wasted no time by opening a bottle of Rubus raspberry ale from Italy. What immediately lifted to the nose was a noteworthy raspberry aroma. The flavor of the pretty pink ale was a slight but not at all unpleasant sour taste. Along with the Rubus, we were also offered balls of fried arancini, an Italian dish made from leftover pea risotto, a specialty of the restaurant's bar just upstairs, ChurchKey. It was a very refreshing and summery start to the seemingly endless dinner that was to follow that evening.

In between our first course and second course we requested a few of the restaurant's specialties, including the crispy duck egg. It's basically a soft-boiled duck egg that is then batter-fried and served with a spring salad of frisée, asparagus, and pancetta. It's a take on the traditional French salade Lyonnaise, which is usually done with a poached egg. It made a very nice starter as did the seasonal specialty of panzanella tomato salad, which Olga from MangoTomato requested. It was a simple and succulent dish of heirloom tomato slices, a fried green tomato, grilled toast, ricotta, and mozzarella. What the restaurant offers to all diners is a selection of amazing breads. It's part of the joy that comes by way of MacIsaac, who bakes everything from scratch. She’s nothing short of a master pastry chef and baker. Included on our bread board were the pretzel bread, olive bread, and sweet cornbread. None of us at the table could resist the pretzel bread and the grainy mustard that came with it.

For our official first course of the tasting menu, we were presented with a tuna tartare dressed in soy, mirin, ginger, and sprinkled with Hawaiian sea salt. A dish with very fresh and clean flavors, it worked well with the beer pairing of Flemish sour ale, produced in Belgium for Monk's Cafe in Philadelphia. (The beer photos precede the pairings in the slideshow.) As Greg pointed out, the sourness of the almost ruby-red ale works well with Asian flavors, in this case the soy-mirin dressing of the tuna tartare.

I haven't seen any menu this summer that didn't have at least one dish that made good use of summer corn. Our second dish in our marathon tasting incorporated corn in a way that I haven't seen before. Fresh tortellini was filled with a sweet corn pudding and served with Dungeness crab meat and broccoli rabe, all drizzled in a butter sauce. Looking back on the entire dinner in retrospect, this was my favorite. The sweetness of the corn, the crab, and the butter sauce worked very harmoniously and the broccoli rabe added a slight bitter note, helping to offset the sweetness by just a bit. The beer pairing was a perfect match: Hochland Bio Honig Bock (organic honey lager) from Germany further brought out the sweetness in the dish. You will immediately notice the golden color, smell the honey, and taste the sweet floweriness in the beer. First the aroma of the raspberry beer amazed me, but now it was the honey beer.

I believe no tasting menu can be complete without fish or seafood of some sort. We were served halibut topped with chanterelles and Roma beans alongside orzo with peas. The fish was exceptionally flaky and tender. And halibut is one of my favorite fish, which unfortunately I don't often have the chance to enjoy. It was paired with Stateside Saison from Stillwater Artisanal Ales in Maryland. This is a beer made with European malt and New Zealand hops with a notable oak flavor from the casks in which it is held. Created much like a Belgian Saison, this Stateside has a pale color and a unique spicey flavor.

I'm a sucker for any lamb dish. I love lamb, especially when it's medium-rare. The spring lamb dish satisfied all my desires. It was beautifully pink and had the taste of real lamb with a slight gaminess. Served with bulgur wheat, the dish had an almost Middle Eastern slant. Once again peas, this time in the bulgur, seemed to be a running theme of the evening. Alongside was a lone roasted cippolini onion and a few streaks of sweet carrot purée. It was a very earthy dish brought out even more by the beverage pairing of Moonraker ale from England, a dark, ruddy colored beer with a sweet, malty flavor that for me made this pairing one of my favorites.

Tête de Moine or Monk's head cheese, as translated from the French, is a unique Swiss cheese with a nutty and funky character. As Engert enthusiastically explained, the cheese is named monk's head because the monks used the same razor to shave the cheese as they used for shaving their scalps. Even today the custom follows of shaving the cheese but the preferred tool for doing so is now the girolle, which creates flower-like blossoms of cheese as it moves around a center point driven into the wheel of cheese. The shaving is thought to open up the flavors and character of the cheese. Served with toasted bread and slices of pickled cherries, the tête de moine was a nice entrée to dessert. Jan de Lichte, a Belgian beer named after a criminal executed more than two centuries ago, was matched with the course. Made with four grains: wheat, barley, buckwheat, and oats, the beer had a golden color and a spicey character and citrus flavor due to the addition of coriander and orange peel.

Sometimes I like a very sweet treat, but it's a craving I rarely have especially after a long meal, when something cloying would sooner make me vomit than help me feel sated. That's when I prefer a light (not 'lite'), palate-cleansing dessert. The goat's milk cheesecake was just that, a clean and tangy dessert paired with a tart cherry sorbet flecked with black pepper, which left a uniquely bright aftertaste. A balsamic reduction and a few pickled cherries round out this sweet and savory dessert. The group agreed that it was one of the highlights of the night. It was paired with Aventinus, a wheat doppelblock from Germany. This dark beer with hints of chocolate very nicely complemented the tart cheesecake and sorbet and played off the balsamic reduction.

If you are ever in D.C. and are looking for a unique eat, Birch & Barley is the way to go. Creations by chefs Bailey and MacIsaac will not let you down. And Engert will have your mind swimming in more beer history than you could ever imagine. I left fuller in more ways than one: full in the "I cannot eat anymore" sense and full with a new knowledge and appreciation for beer. The bustling dining room and winding queue outside the door say it all. I expect the newfound popularity of this culinary gem in D.C. won't soon fade.