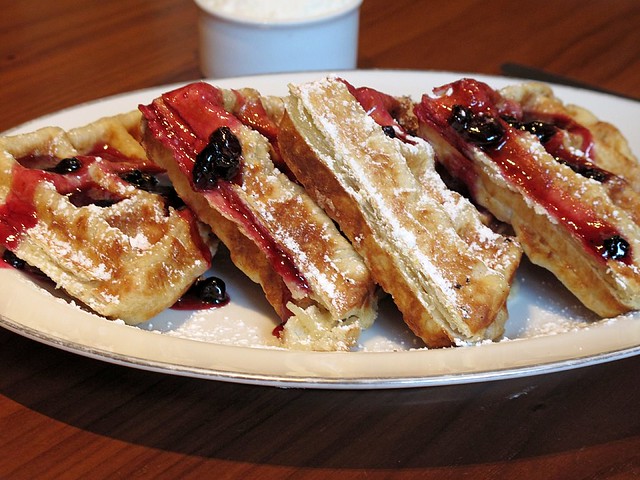 Blue Duck Tavern, located in the Hyatt Hotel in the West End area of Washington, DC, is considered to be one of the area’s most popular restaurants. On my last day in DC, I had the opportunity to enjoy brunch there with my group of journalists with Destination DC. The dark, massive, and almost temple-like doors are the first thing you notice as you approach the entrance. It felt like I was entering a mighty temple of food. The interior is very contemporary with rustic touches. The aesthetic is dark, brooding, and masculine. Some objects, such as the chairs and quilts adorning the walls, appear to be early American. In the open kitchen, now and then you might catch a glimpse of chef Brian McBride. The open-kitchen concept was designed by New York architect Tony Chi.

The kitchen is the star. It’s kept impeccably clean and organized with all prep completed in the early morning. The focal points are the wood-burning oven and custom-made Italian Molteni stove. A large wine room, stocked with hundreds of bottles, is just to the side. Sleek marble clads the service counters, blurring the lines between dining room and preparation area. Just walking to one's table, you don’t know which way is in or out of the way. But it feels unique to be so close to where the food is made. The menu goes one step further, naming locations from where the restaurant sources the ingredients. It’s quite fun to know my breakfast eggs came from Crazy Chicks, Pa.

We began our meal with what else but cocktails. The restaurant offers twists on classic cocktails. One such twist was the pear and basil Collins that I ordered. The sweet pear and perfumed basil complement one another quite well in this rum concoction. Other drinks of interest include a peach sangria, the traditional bellini, and a few mocktails. As we waited for our main breakfast, we were presented with an order of croissants with preserves, honey, and ricotta. The croissants were crisp and fluffy, perfect with my personal pot of coffee. The bread with butter was also scrumptious. A few of us ordered appetizers such as crab cakes or oysters with mignonette sauce. With all the food that was to come our way I decided against ordering any starter, though I was tempted.

I was craving eggs that morning so for my breakfast I ordered the salt cod cakes with sunnyside eggs and spicy buttermilk sauce. The cakes had nice texture, but were quite salty, though they were redeemed by the spicy tangy sauce. But what I enjoyed more was my sourdough pancake with dried cherries. Though I hardly found a cherry, I did like the cakey texture of the oven-baked pancake. I ate it without even realizing I had not poured it over with the warmed maple syrup provided. Others enjoyed a short rib hash, eggs Benedict, a very excellent looking bacon and onion quiche, and Belgian waffles, which looked amazing, dressed in huckleberry preserves. They were almost as authentic as the waffles we had at Belga Café the night before. The triple-fried fries are one of the specialties of the restaurant and are fried in duck fat in the final round. These were some very thick hand-cut fries, plank-like in shape. They were fluffy on the inside and crisp on the outside, though I did not get that hint of duck fat I was hoping for, but they were still good enough to eat.

Many of us were quite full to the brim at this point and more than ready to leave. In fact one of us had to leave to make her flight. Our napkins were already tossed on the table, but before we could even get up, the servers presented us with the entire dessert menu. First was the restaurant's famous apple pie. Supposedly the recipe is legendary because it took countless tries before it was deemed perfect. It was in fact perfectly crusty with a superb filling. It was a simple as simple gets, but simply amazing. Next we had the key lime pie with blueberry sauce. It was everything you could ever want in a key lime pie, tart and sweet. Next was the mascarpone cream in a pool of cherry soup. It tasted much like a cheesecake. We also had a very homey blackberry and nectarine crumble, peach sorbet, and a raspberry-oreo sorbet, which was a very unique combo, one that I expected not to work, but it did.

As we hurriedly left to make our trains and planes, I could not help but stare at the preparations going on in the open kitchen. Food is laid out on the counters with heat lamps overhead. Servers are gathered and ready to take dishes out to anxious patrons. I loved also seeing baskets of produce on display. It really shows the restaurant’s dedication to local, fresh, and high-quality ingredients. The basket of variously colored heirloom tomatoes looked especially beautiful. One counter was full of freshly baked apple pies at the ready for ordering customers. I wish I could have taken one home for the train ride; they just looked so perfect and puck-shaped.

Blue Duck Tavern was truly a fantastic experience. I would definitely go back again for brunch, lunch, or dinner. The service was excellent and very attentive. The food was top of the line. And just watching the kitchen action was the most interesting. Mind you this is not some reality show like Hell’s Kitchen, but a very methodically and meditatively run kitchen. The best way to describe it is as a well-running clock.