A Tour of Little Ethiopia in Washington, DC 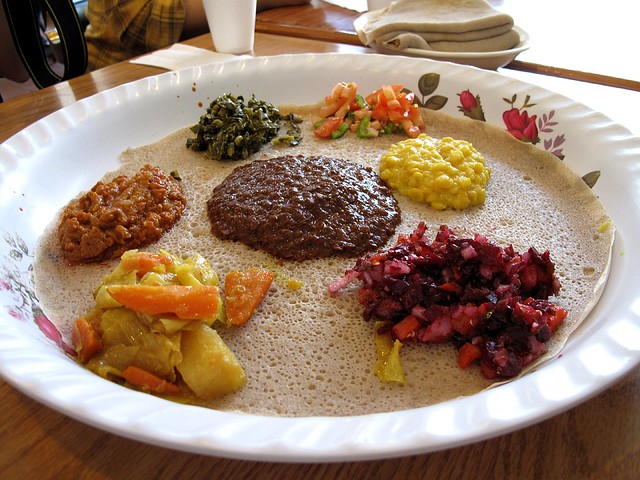 I've never tasted Ethiopian food until my trip to Washington, DC last month. It seems Ethiopian food has been on the pulse of the culinary world for quite some time. Just witness a recent episode of Top Chef where the contestants cook Ethiopian food for chef Marcus Sameulsson. I've always wanted to try Ethiopian food and I know New York has a good selection of Ethiopian restaurants, but somehow I was always scared of the fact that Ethiopian food requires you to eat with your hands. No utensils are used. Ethiopian food uses a spongy pancake-looking bread made from fermented teff flour called injera as its main utensil. You rip a piece of it and scoop up a mouthful of food. Many cultures eat food in this way. So it's not as unusual as you would think. After trying my first injera and eating almost properly with my hand, I've come to really appreciate the custom and enjoy the spicey flavors of this mystical East African country.

Little Ethiopia is the unofficial name for a section of the Shaw area of DC on 9th Street between T and U streets. The area was known for its African-American community, but since the 1968 riots the African-American population has slowly declined and the area has since become a magnet for Ethiopian businesses, which have revitalized the streets. In fact Washington, DC has the largest population of Ethiopians outside the country itself. Hundreds of businesses can be found in this small area. A separate Ethiopian phone book is even published to keep track of it all. Our group of writers/bloggers was treated to a tour of Little Ethiopia by DC Metro Food Tours, which offers all types of food walking tours of DC. Our Ethiopian tour included stops at three popular restaurants, where we had the opportunity to taste amazing traditional food and drink.

Our first stop was Zenebech Injera, a restaurant and injera supplier. Zenebech, the woman who owns and runs the restaurant, makes injera for most of DC's Ethiopian restaurants. She also cooks the authentic Ethiopian food. After watching Zenebech make injera on crepe-like griddles, we sat down to a large feast of Ethiopian specialties. Our first platter of food included vegetarian dishes of split pea and bean stews, potatoes, collards, beet and tomato salads, and the cottage-like cheese called lab. After that we tried both cooked and raw version of kitfo, which is minced beef flavored with spices. The raw version tasted much like steak tartare but spicier. Finally we had doro wot, the national dish of Ehipoia. It's a very flavorful stew of chicken and hard-boiled eggs and it uses the traditional spice mix berbere. Some of us also tried the honey wine called tej. the honey color and sweet floral taste totally reminded me of the Hungarian dessert wine Tokaj. Our time with Zenebech in the kitchen and our lovely meal was truly a nice introduction to Ethiopian cuisine.

Our tour continued on to Habesha Market and Carry-Out, where we enjoyed some traditional Ethiopian breakfast foods. The market sells injera made by Zenebech as well as spice mixes, teas, beans, legumes, grains, and of course food to eat-in or take-out. We tried lamb tibs, chunks of sauteed lamb; kinche, cracked wheat; foul, broad bean stew with scrambled egg and yogurt; and tripa, a stew of tripe and tongue. I liked them all but was most pleased with the foul, pronounced fool. The beans were so creamy and flavorful that I could have eaten the whole bowl. I went back to it again and again. Most of the group avoided the tripe and tongue stew for the obvious reasons. Its sauce was spicy and flavorful, but I've never really had either tripe or tongue, so I tried a small bite. Let me just say the textures of both are very spongy. I think I won' be eating it too soon. The kinche reminded me of bulgur in a Middle Eastern tabbouleh, but this dish tasted a lot more like Moroccan couscous. Our bread accompaniments were both injera and ambasha, a brioche or challah-like bread shaped like a large wheel. Our tour guide Sarah said that she makes French toast out of it. That's a breakfast I would go for too.

The tour couldn't have ended on a better note than with a traditional Ethiopian coffee ceremony at Little Ethiopia restaurant. Located in the ground level of a town house, the restaurant is decorated just like an Ethiopian home with walls hung with paintings and crafts and traditional tables and chairs. It's as close to how an Ethiopian home would look like in Ethiopia. As we arrived we could see and smell the roasting of the coffee beans. A hostess slowly toasted the beans in a shallow pan set over a burner, using a wire to toss the beans. The beans gradually turned darker and darker until they were ebony. Soon the finished beans were whisked away to be ground and steeped to make our coffee.

Meanwhile we were treated to a customary hand-washing as one of the hostesses came by with a kettle of warm water, bowl, and towels. The proprietor, Tutu Belay, treated us to her lentil sambusas, which tasted just like Indian samosas. As we eagerly awaited our coffees, I couldn't help but wonder what it would taste like. The coffee turned out to be a dark, rich liquor and tasted no different from a good espresso except for a slight sour note. I tasted it black first and then added sugar and a spoonful of dry milk, which is the traditional way of drinking it. Afterward we toured Tutu's gift shop above the restaurants and met her musician husband, Yehune, who performs in the restaurant on Friday nights. It's a sure way to bring in more customers especially tourists who want to learn more about Ethiopian food and culture.

The Little Ethiopia area is definitely a must-see part of DC. It's a tourist attraction in itself. You walk through the streets and you are immediately transported to Ethiopia. The promise of colorful and flavorful food welcomes you in and music keeps you there longer than you would expect. I highly recommend watching a true coffee ceremony. After all coffee was first discovered in Ethiopia. Why not learn from where and how your morning "cup of Joe" originated? Any of these three restaurants offers a fine experience, but Little Ethiopia restaurant was my favorite for its authentic atmosphere. Do remember that there are many more Ethiopian restaurants in DC than I've mentioned here. If only I had the time to go to all of them, but even so I was able to experience a very nice sampling of the country's food and culture, which is always the best way to be introduced to a nation and its people. In Little Ethiopia you will find warm and inviting people and much more.