Ode to the Apple 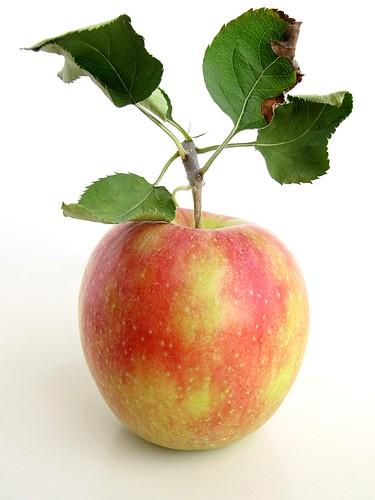 Who can imagine fall without apples? I can't. Apples are probably this season's most popular and favorite fruit. Just before the leaves start turning apples come into season. Though some varieties can even be harvested in mid-summer, the most popular ones, especially those for baking and cooking, are available in fall. As far back as I can remember, apples have always played a part in my childhood. Every fall my family would go apple picking and cider tasting. We still do. I still buy a jug of apple cider and a bushel of apples every single time. Each year always seems to bring better and better apples, farm apples being the best. They are worlds apart from supermarket apples, which are picked months in advance. Nothing beats biting into a freshly picked apple.

My favorite apple varieties are the ones that balance tart and sweet, such as Jonathan, which has beautiful striated red and green coloring. I try to follow the maxim: "an apple a day keeps the doctor away." It's actually quite true, apples contain many antioxidants, which may prevent the onset of cancer and other diseases. Besides eating them out of hand, everyone knows and loves the all-American dessert, apple pie. No holiday in the fall and winter can possibly go on without it. I bake quite a few every autumn. I'm always looking to perfect my pie-making skills and find that right combination of apples to produce the optimal texture. Baking a homemade apple pie is worth the effort; it's just one of those essential American pastimes.

You would think that the United States is the leader in apple production, but actually it is China, the country from which apples originate. Apples eventually spread into Europe, becoming iconic fruit in many nations, finding importance in Greek and German cultures. Plus don't forget Adam and Eve in the Garden of Eden. The first apples were brought to North America by colonists in the 17th century who planted the first orchard near Boston. By the 20th century, apple production had become a major business in this country, with Washington state becoming the leader. Now there are many pick-your-own apple farms across the country in practically every state.

There are literally thousands upon thousands of apple cultivars. Modern-day varieties are very different from ones that were grown years ago. Our collective tastes have turned toward the sweeter, redder, and glossier. fruit Quirks have fallen out of favor, including russeting, in which the skin is rough like potato skin. Only a very small minority prefers tart apples. Did you know that apple trees are not planted from seed, but they are actually grafted onto root stock? Nowadays orchards, especially pick-your-own farms, graft apple varieties onto dwarf root stock so that the trees are easy to reach for picking. Grafting is the best way to maintain the special characteristics of a specific cultivar and prevent radical mutation. But in some cases crossbreeding the apples results in very desirable fruit. Combining two varieties into a brand new one is a popular practice.

There are countless crosses, but my favorite for both eating and baking is Jonagold (pictured above). It's a cross between Jonathan and Golden Delicious. There are also Jonamac (cross with McIntosh) and Jonalicious (cross with Red Delicious). Some of the best varieties for eating are McIntosh, Empire, gala, Honeycrisp, Jonathan, Macoun, Red and Golden Delicious, and Gingergold. My favorites for baking are Cortland, Fuji, Granny Smith, Jonagold, Mutsu (a.k.a. Crispin), and Winesap. If you plan to make a French tarte tatin, be sure to use eating apples, baking or cooking apples turn to mush. But when baking pies, do not use eating apples, because they turn to mush. It's always advisable to use the appropriate apple for the job. If you're not sure what to buy at the farm stand or what to pick at the local orchard, ask the farmer or orchard staff. They always seem to have the right information. They might also share a few good recipes.

When choosing apples remember that color does not indicate ripeness. So don't always pick the bright red ones. The farmer will know which trees bear ripe fruit and will designate them ready for picking. Areas with trees that have unripened fruit will typically be cordoned off from visitors. To pick the fruit, it's best to take hold of the branch with one hand and the fruit with the other. Remove the apple by twisting and not pulling. Some varieties present apples in pairs like cherries. If you take one from the tree, the other will naturally come with it. If an apple drops while you are attempting to pick it, don't let it go to waste; pick it up. The worst thing you could do is leave it on the ground. So much fruit goes to waste from uncaring visitors. You would think that fallen fruit goes into cider-making, but it's not the case. Never throw apples into your bag or basket, but place them in gently. They do bruise like all fruit no matter how firm they seem to be. 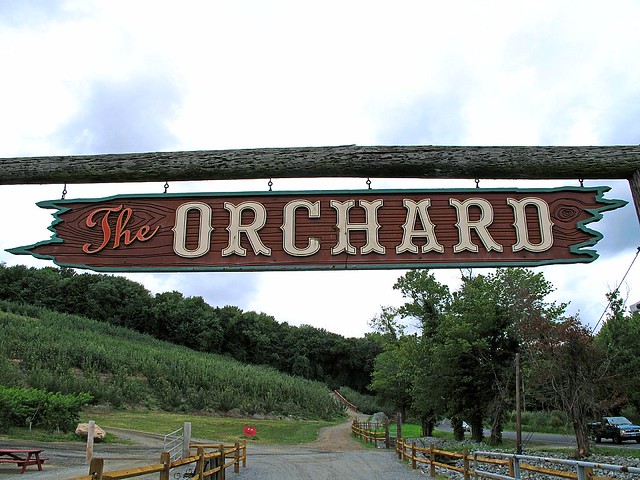 In Connecticut, my go-to farm has always been Silverman's Farm in Easton. You probably remember my mentioning it countless times before. They offer peach, plum, and apple picking when in season. They also sell pumpkins in October and Christmas trees leading up to the holiday. Their farm store sells cider, jams, jellies, honey, and freshly baked pies, tarts, pastries, and cider donuts. Their apple turnovers are my favorite. It's truly a very fun farm to visit for families and kids. To find pick-your-own farms in your state, click here.
Labels: market out and about recipes writings