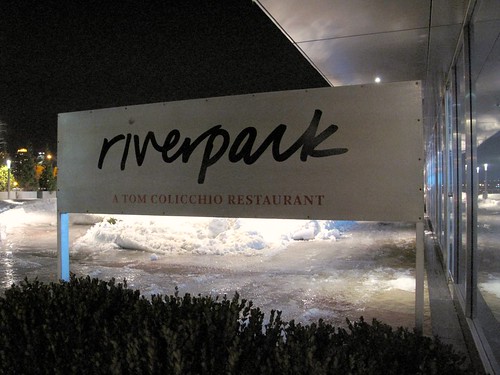 After having some pretty bad restaurant week experiences this past few weeks, I finally had a breakthrough at Tom Colicchio's new Riverpark, located in the Alexandria Center for Life Science building alongside the East River. Like the building, the restaurant has a very modern and classy look, not at all austere, but with just the right blend of architectural styles. A bar breaks up the restaurant into two spaces, one is slightly elevated and the other space looks out onto the river. A very unique lighting fixture of unadorned light bulbs wraps the ceiling, up one wall and over to the bar. It’s almost dizzying if scanned too quickly, but it set the mood for a whirlwind evening of wonderful eating.

For a restaurant that makes you go so far out of your way—all the way to the East River, they better be good. And, oh, it was good. Surprisingly, the restaurant week menu that appeared online was only a snippet of the one handed to us, which appeared to be much like the regular menu, offering ten options per course. It’s the first time I had ever seen more than three offerings per course for a restaurant participating in restaurant week, an event that is notorious for being a mixed bag of dining experiences. The dessert menu, instead of a chef's choice (meaning no choice for the diner), had seven choices including a cheese plate. It was difficult to make a decision with so many options available, but I’m always glad for that. 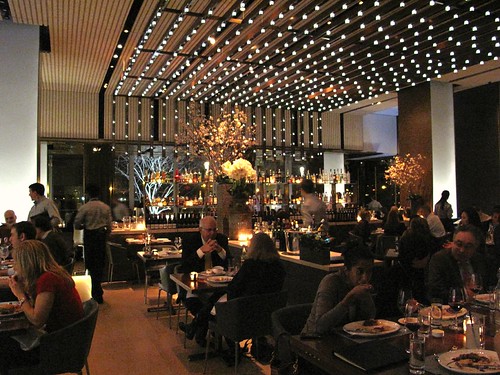 The appetizer course had offerings that ran the gamut from fresh oysters to the over-popularized pork belly. There were Italian-inspired pasta dishes, Asian-style combinations and even one Mexican dish of squab mole that I had to order. I haven't had all too good experiences with mole sauces in the past, either they are too strong or just plain muddy. This mole was just right for my palate: mild, flavorful, and savory. The squab was cooked beautifully, deep crimson on the interior and not at all tasting of game bird. The crushed pistachios on top were a nice touch as both a garnish and textural component. The other appetizer of marinated prawn salad, which sounded so elegant, was just that. Two head-on, tail-on prawns were lovingly intertwined among frisée leaves, shaved sunchokes, and blood orange segments. Two smears of root vegetable purée added their sweet flavor to the refreshing appetizer.

For our main course, my friend Kristen and I switched back and forth between a most tender lamb and a delicately cooked cod. The lamb was tender enough to cut with a butter knife. It rested atop a pile of lentils that truly looked like little coins, cooked to perfection and highly flavorful. The dish was what I would call woodsy, and was surrounded by a mushroom salad and turnips, further underlining the earthy feel and flavor. The cod, just on the salty side, was adorned with fennel and was nested in a potato purée, studded with clams taken out of their clam shells. Both dishes impressed upon me chef Sisha Ortuzar's care with ingredients and focus on seasonal produce. In fact all the ingredients are sourced locally and many purchased from the Greenmarket. There were no peas or asparagus on this winter menu, thank goodness.

Oftentimes dessert offerings during restaurant week are very limited and uninteresting. But even during regular times, a restaurant's main dishes can be spectacular whereas dessert can quickly fall short. Still I never skip dessert because I want to see what importance the restaurant places on the sweet dishes. With all the many great offerings on Riverpark's dessert menu, how could I possibly choose? There was the restaurant standard/stand-by of chocolate soufflé cake. There were also beignets with marmalade, apple crisp, and cinnamon panna cotta. It's as if they knew what all my favorite desserts were and put them on the menu to confuse me. I let my friend choose the cheese plate, which I had never before seen on a restaurant week menu. I was caught between the beignets and the hazelnut financier. I ordered the financier to appease my love for hazelnuts. This was nothing like the classic financier cake, made to look like a gold bouillon bar, supposedly eaten by French bankers. This was a Napoleon-style cake with alternating layers of hazelnut cake and vanilla semifreddo surrounded by hazelnut halves and pomegranate seeds, poured around (as part of tableside service) with a sweet pomegranate consommé. It was like eating a sweet, creamy cloud. I could not have been happier with a more successful dessert.

To accompany our dinner, we imbibed a glass of wine each, a Syrah/Grenache blend and a Chardonnay. There was no better complement to lamb than that red blend from Cellar de Capcanes, Montsant, Spain. The Jamesport Chardonnay from the North Fork of Long Island was quite nice with the fish but even better with the cheese course, which came with three cheeses: Meadow Creek Grayson, a pungent and nutty Taleggio-like cheese from Virginia; Lively Run Cayuga blue, a creamy blue goat’s cheese made in upstate New York; and Ossau-Iraty Vieille, a hard raw sheep’s milk cheese from France. The accompaniments were marmalade, apricot preserve, and honey with the comb.

If only I had the time and money, I would have started the dinner over with a new set of dishes until I'd have been booted out of the restaurant for overstaying my welcome. The service was quite nice, attentive, water glasses refilled promptly with filtered NYC tap water, I might add. I always wonder if my camera gives the wait staff consternation, but I had to attempt and capture the beauteous styling of those dishes, though the squab mole looked so dark and dreary that my astounded facial expression made the server ask if it was the correct dish I ordered. I was merely wondering how I'd take that pigeon's picture; after all it was covered in what looked like black tar. But, alas, I have no pictures of the food to share, as the quality of the images was quite low due to dim and moody lighting. I hope my descriptions aptly describe and give justice to those dishes.

If I ever open a restaurant, a thing of my wildest dreams, it would be something like Riverpark, with a mix of international cuisines and a lot of attention to ingredients and seasonality. That is what makes a good restaurant and is what all restaurants should strive toward achieving. This was my first time at a Tom Colicchio establishment outside of 'wichcraft, and I had no expectations going into it, just because I had no idea what to expect. I've always known that Tom Colicchio has immense respect for ingredients and an expertise for bringing out their best form, but now that I have encountered his mantra first hand, I can place this dining experience on my list of top New York City restaurants.