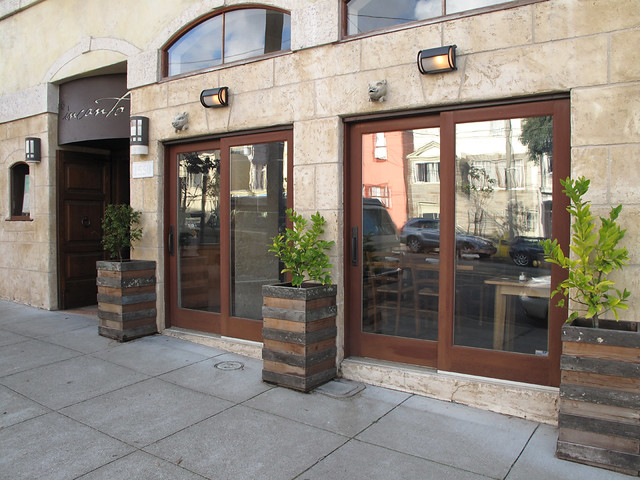 I've been a fan of nose-to-tail dining for quite some time, but I haven't actually eaten true offal cuisine. After booking my March trip to San Francisco, the first thing I did was make a reservation to Incanto, the mecca of offal (animal innards) cuisine. Chef Chris Cosentino uses meat, particularly pork, as his muse. He creates amazing cured meats at his shop Boccalone in the Ferry Building Marketplace and serves rustic Italian cuisine at his restaurant Incanto, where the menu changes daily. If you haven't heard of Chris, you've probably seen him on the Food Network, running around with fellow chef Aarón Sanchez on Chefs vs. City. If you're prepared to try offal, Chris's restaurant is the best place to start.

Located in the Mission District of San Francisco, Incanto looks like any another unassuming restaurant. The only indications of what may be beyond the door are the little grinning piggy sculptures above the windows. The restaurant has the feel of an Italian farmhouse with walls adorned with butchering equipment: saws, cleavers, and knives. An archway splits the space into two, one side is the bar and the other, the dining room. The wine room and the kitchen are just toward the back. Fellow blogger Amy Sherman of Cooking with Amy joined me for a wonderful dinner that was offal-y good!

For our appetizers, we divided our attention among three plates. First, marinated sardines were served with thinly shaved watermelon radish and citrusy sorrel leaves. The fish was buttery and flavorful and was a nice introduction for me to the bay area's famous sardines. Next we enjoyed thin slices of Boccalone Ibérico lardo over sliced Nakita pear and mint leaves. The lardo simply melted in the mouth like butter. The salad was a true play in textures with the crisp pear and ruffly mint leaves. Our warm appetizer consisted of foie gras with pig's trotters topped with citrus marmalade. Unctuous—a word I seldom use—is the only way for me to describe the dish. The marmalade really worked well to cut through the over-the-top richness.

Not surprisingly, the menu has a lot off unusual offal offerings, beyond the expected, including tuna heart, tripe, and calf's kidney. To keep to the Italian tradition of having pasta or rice as a primi (first course), we chose to try the Sardinian cured tuna heart over spaghettini with egg yolk. The pasta dish looked like a bird's nest with a glistening yolk in the center. We were instructed to mix it together before eating. The result looked a lot like spaghetti carbonara. The cured tuna heart is not like you might imagine. It isn't a whole heart on the plate, but a cured heart, shaved to create flakes. What does it taste like? The consensus was kalamata olives. On a blind tasting, I would not have been able to say: "Yes, that's cured tuna heart."

I couldn't do it. I couldn't order the calf's kidney. First, it's kidney, and second, it's from a calf. For some reason I just do not like eating veal, so calf's kidney was out. Instead we chose the classic duck confit, which came with spring roots and flowers. Some giblets also made it onto the plate. The dish was poured over with a very subtle-tasting Meyer lemon broth. I found the duck itself to be somewhat bland and undersalted, but we did eat it after having the other main course of the very flavorful octopus. The pulpo inzimino consisted of stuffed baby octopus served in its own ink along with cavolo nero (black kale) and a topping of aioli. To my surprise, the dish was amazing. The flavors were powerful and the octopus was tender though unsightly. It was probably my favorite dish of the night.

By now you know my rule: I don't leave any restaurant without trying dessert even if there's barely any room left. Both Amy and I were filled to the brim and were packing doggie bags. But I convinced Amy we should try a dessert—or two. At Ubuntu, I ordered the entire dessert menu, but here I had to limit myself. There was just no room! First we had the pink peppercorn panna cotta with stewed cherries. I love panna cotta, so this dessert was a must. The pink peppercorns added fruitiness and sharpness to the creamy dessert. The cherries were nice, but I craved fresh fruit instead. The second dessert was a simple chocolate pudding, which I unfortunately found to be very stiff and chalky in taste. Each of us could only stomach a few spoonfuls of dessert before setting out.

Inacnto was a great and gluttonous experience. I surely could only do a restaurant like that once or twice a year. Both Amy and I had fun talking about the food world and reality TV. Surprisingly the Voltaggio brothers of Top Chef fame were also diners that evening, sitting sulkily in the corner. Chef Cosentino had been checking on their table all night, before it dawned on us that the diners were indeed Michael and Brian. If I'm ever in San Francisco again, I'd love to dine on an entire pig at Incanto, but I'd have to gather a crowd of people to help me finish it all. I highly recommend sharing pretty much all the plates at the restaurant. It offers a chance for everyone at the table to taste the unique food and it also lessens the need to finish everything yourself.